We were given free tickets to Stage Life for review purposes. Any and all opinions expressed here are our own. 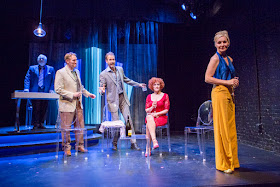 Who: Teens and Up Mom - Stage Life is a show about the craft of theater. It does not have a linear plot but it is just a series of scenes that do not really have any connection to each other except that they are all related to the theater in some way. There are scenes about acting class, critics, playwriting and more some of which are more interesting than others.  The show is well acted by the six member cast who all play a variety of different roles many of them actual historical figures including Geraldine Page, Anton Chekov, David Belasco, and Sandy Meisner.  The show is full of great theater quotes which are recited between scenes. The show is somewhat slow, however, and would probably be most interesting to those in the acting profession themselves or for anyone interested in a primer on theater. It is definitely not a show for children or anyone with a short attention span. 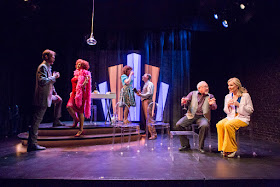 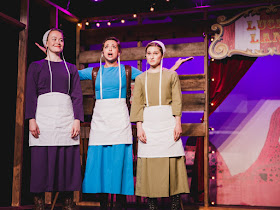 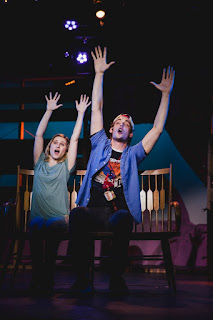 Me - Single Rider was good. It was about these Amish girls on Rumspringawho went to this amusement park and met people that they were attracted to. I liked that this show unpredictable. The story was interesting. I didn't know that much about the Amish. It was fun to learn about them through a show. The characters were mostly likeable.  The songs were really good. I liked them. I don't remember them now, but I would like to listen to them again. If they put out a CD of the show I would get it. The acting, singing, and dancing were all enjoyable. The amusement park set was cool. The show was completely different than any show I ever saw before. I liked that about it. People who like a show with an interesting plot, likeable characters, and good songs would enjoy this show. 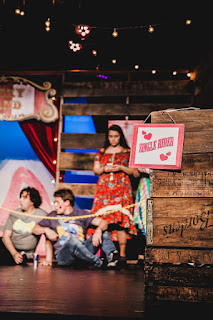 Mom - Single Rider is a sweet, charming, and romantic story. It is the story of 3 Amish teenagers on Rumspringa who take a trip to an amusement park that changes their lives. Sarah is looking for a good time but she may find more than she bargained for. Moira just wants to take it all in, but she discovers things about herself that she never knew. Abigail is the least enthusiastic of the trio but then she meets Shane and begins to question everything about her life and her future. The show has an engaging story, interesting characters and nice songs including some really beautiful ballads. The cast does a good job with their roles especially Angela Sclafani as the innocent Abigail whose eyes are sweetly opened to the wider world. She and Clay Singer as Shane have a nice chemistry together. The ending may upset some people who prefer shows to have a more definitive conclusion but all in all, it's a very entertaining show that fans of romance in particular should enjoy. 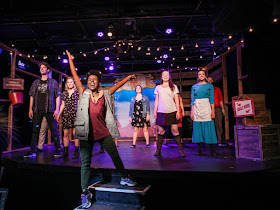 What: Molasses in January 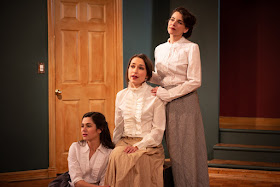 Me - Molasses in January was interesting. It was a show about people who lived in Boston where there was a big molasses tank. It was leaking. Some people thought it was going to explode. I had never heard the story before I saw the show although it was based on a true story. I liked some of the songs but I don't remember them. The acting was good. The singing was lovely. The sets and costumes were very old timey. However, that is because the show took place a long time ago. My favorite thing was that I learned something about a part of history I never knew about. I like learning things from shows. When I learn things in school, I am never interested. It is more fun to learn things from a show. The show was special because it talked about something in history that I really hadn't heard mentioned before. People who are interested in learning about history in a fun way will enjoy this show. 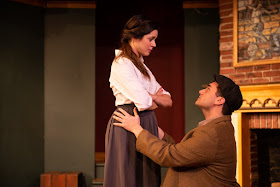 Mom - Molasses in January is a show about the Boston Molasses Disaster of 1919. However, the actual disaster is kind of glossed over and is not really dealt with that much in the show. It is actually kind of anticlimactic because throughout the show they hint at the fact that some big terrible thing is going to happen, and then, when it finally does it gets just a brief mention toward the very end of the show. It is hard to comprehend how terrible this event really was when only one character in the show is directly effected by it. Instead the show  is mostly the story of a family. Their lives are effected by the Boston Molasses Disaster but that is only a small part of their story. It is more about a determined woman raising two children on her own after bravely kicking her cheating husband out of their home. It is also about her children growing up and coming into their own. The show is a musical but mostly the songs are not all that memorable although there are one or two nice ones particularly the touching ballad Not Any Particular Star Will Do. If you are interested in the story of a family in 18th century America, you may enjoy this show. If you really want to find out about the Boston Molasses Disaster, it is better to look somewhere else.

For more information or to purchase tickets to Molasses in January, visit
http://www.molassesinjanuary.net/.

And that's our view. Tune in tomorrow for Funtivity Friday.